If you are looking for a top down CPU cooler that is virtually silent and offers great performance you would be hard-pressed to find anything better than Scythe’s Choten TUF. 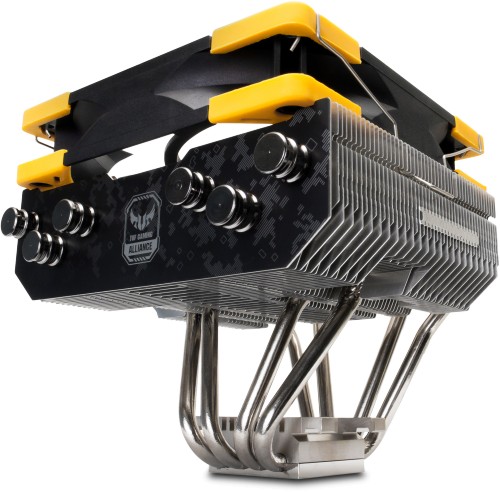 In cooperation with Asus, Scythe presents the TUF Gaming Alliance version of the Choten CPU cooler. Design elements such as a side plate decorated with the TUF logo as well as a 120mm RGB LED Kaze Flex fan with matching yellow rubber decouplers connect the cooler with the remaining TUF Gaming Alliance components. During the development of the Choten, Scythe’s focus was not only on excellent performance, but also on unrestricted compatibility with RAM. The asymmetric design coupled with a large gap between the motherboard and heatsink ensures excellent compatibility with large memory modules. The cooler features a preinstalled Kaze Flex RGB 120 PWM fan, giving the Choten CPU cooler a total height of only 122 mm, allowing it to easily fit into the majority of PC cases. This mix of good performance, high compatibility and high-quality axial fan makes the Choten an attractive CPU cooler for compact but demanding systems.

The secure and user-friendly Hyper Precision Mounting system centers around a preassembled mounting bar, which features spring-loaded screws to guarantee a perfect contact pressure. In combination with an updated backplate and rubber / plastic spacers the system offers a convenient installation process and compatibility to all current platforms.

The Choten is equipped with a PWM fan from the award-wining Kaze Flex series, operating in a range from 300 to 1200 RPM. The self-contained liquid bearing (Sealed Precision FDB) reduces friction and wear to a minimum, resulting in an average lifespan of 120,000 hours. Rubber pads mounted in the fan frame have a decoupling effect that dampen the transfer of vibrations.

Aiming for maximum compatibility the heatsink is not centered above the baseplate, but slightly offset to the side and back. This asymmetrical design allows for unrestricted use of all memory slots. It also points the heatsink away from the graphics card, leaving enough space for even the bulkiest GPU coolers. With a compact height of only 154 mm the Choten easily fits all standard PC Cases.

“Computer noise driving you mad? Me too. Until I bought a Quiet PC Nofan A430S Skylake Silent Desktop. Now - the website says it’s silent, and the helpful guys on the phone at Quiet PC said it was silent, but I still found it hard to believe. Having used the PC for a couple of weeks now, I can say that it is 100%, completely, totally silent. The only sound you ever hear is a little sigh when it starts up. Now I hear all those other noises - like the faintest hum from my desk lamp! I also opted for the fast 256GB Samsung SM951 M.2 PCIe NVMe SSD (solid state drive). Now, I can be opening emails just 30 seconds after switching on. No more waiting and waiting. A note of caution: on the website, read the PC descriptions carefully. Some have moving parts, which inevitably generate a certain amount of noise, however tiny. The A430S Skylake Silent Desktop does not contain a single moving part. Hence the silence. I would also like to praise the guys at Quiet PC for their helpful service. There was always someone on the end of the line (during normal working hours), and they were always more than willing to answer questions and explain how it all works. They even included an enlarged printout photo of the serial number for registering the OS with Microsoft, as the actual number on the back of the PC is tiny and difficult to read. I would recommend this product and this company to anyone.