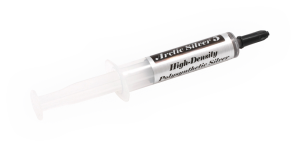 Arctic Silver is a manufacturer of high-performance thermally conductive compounds and adhesives.

“Computer noise driving you mad? Me too. Until I bought a Quiet PC Nofan A430S Skylake Silent Desktop. Now - the website says it’s silent, and the helpful guys on the phone at Quiet PC said it was silent, but I still found it hard to believe. Having used the PC for a couple of weeks now, I can say that it is 100%, completely, totally silent. The only sound you ever hear is a little sigh when it starts up. Now I hear all those other noises - like the faintest hum from my desk lamp! I also opted for the fast 256GB Samsung SM951 M.2 PCIe NVMe SSD (solid state drive). Now, I can be opening emails just 30 seconds after switching on. No more waiting and waiting. A note of caution: on the website, read the PC descriptions carefully. Some have moving parts, which inevitably generate a certain amount of noise, however tiny. The A430S Skylake Silent Desktop does not contain a single moving part. Hence the silence. I would also like to praise the guys at Quiet PC for their helpful service. There was always someone on the end of the line (during normal working hours), and they were always more than willing to answer questions and explain how it all works. They even included an enlarged printout photo of the serial number for registering the OS with Microsoft, as the actual number on the back of the PC is tiny and difficult to read. I would recommend this product and this company to anyone.