The GA-Z390I AORUS PRO offers a wealth of connections and features including USB 3.1 and a choice monitor connections - HDMI and DisplayPort, with the HDMI port being HDMI 2.0, meaning 4K at 60Hz! 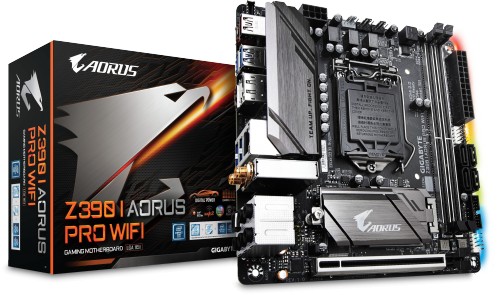 The falcon utilises its powerful wings to soar through the skies and lock down its prey. The AORUS Core takes inspiration from the falcon’s aerodynamic wings, incorporating a multi-layered design which features wing shaped contours and also resembles the falcon’s high velocity ascension and dive through the skies. With sleek and metallic armor, the AORUS Core symbolises advancement in technology with its futuristic style.

Z390 I AORUS PRO WIFI motherboard uses an all IR digital CPU power design which includes both digital PWM Controllers and PowIRStage MOSFET, and is capable of providing at least 40A of power from each phase, for a total of 240A. These 100% digital controllers and 8 Solid-pin CPU Power Connectors offer incredible precision in delivering power to the motherboard’s most power-hungry and energy-sensitive components, allowing enthusiasts to get the absolute maximum performance from the new 8-core 9th Gen Intel Core processors.

Support for DDR4 XMP Up to 4400MHz and Beyond

AORUS is offering a tested and proven platform that ensures proper compatibility with profiles up to 4400MHz and beyond. All users need to do to attain this performance boost is to ensure that their memory module is XMP capable and that the XMP function is activated and enabled on their AORUS motherboard. 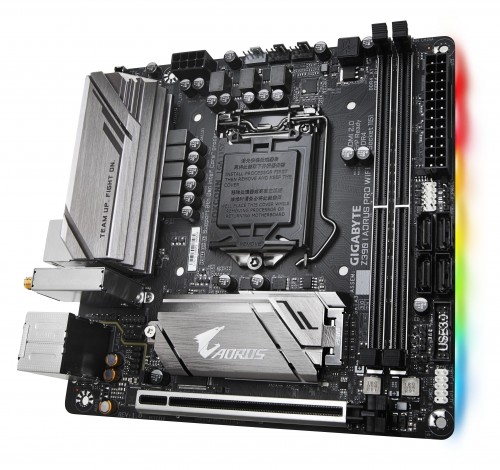 HDMI 2.0, which is backwards compatible with HDMI 1.4, offers 18 Gb/s of bandwidth – nearly twice that of the previous generation. This unlocks the potential for users to transfer multiple video streams, as well as a native cinematic 21:9 ratio (which most movies are shot in), offering the best visual experience for viewers.

AORUS Gaming Motherboards are focused on delivering M.2 technology to enthusiasts who want to maximise their system’s potential. GIGABYTE also provides a thermal solution for M.2 SSD devices. The M.2 Thermal Guard prevents throttling and bottlenecks from high speed M.2 SSDs as it helps to dissipate heat before it becomes an issue.

Equipped with next generation connectivity AORUS Motherboards already support the chassis of the future. The onboard USB Type-C Header for USB 3.1 Gen1 makes access convenient when connecting a USB 3.1 Gen1 drive or charging your new mobile device.

With Smart Fan 5 users can ensure that their gaming PC can maintain its performance while staying cool. Smart Fan 5 allows users to interchange their fan headers to reflect different thermal sensors at different locations on the motherboard. Not only that, with Smart Fan 5 more hybrid fan headers that support both PWM and Voltage mode fans have been introduced to make the motherboard more liquid cooling friendly. Users can also achieve fan silence. With Fan Stop, map any fan to stop completely when temperatures drop below a specified threshold. Which fan stops, based on readings from which sensor, and at what temperature - all of it can be customised to your liking.