Noctua’s NH-D15S chromax.black is a slimmer version of their award winning NH-D15 to allow greater compatibility with surrounding components. This all black version will cool as good as it looks! 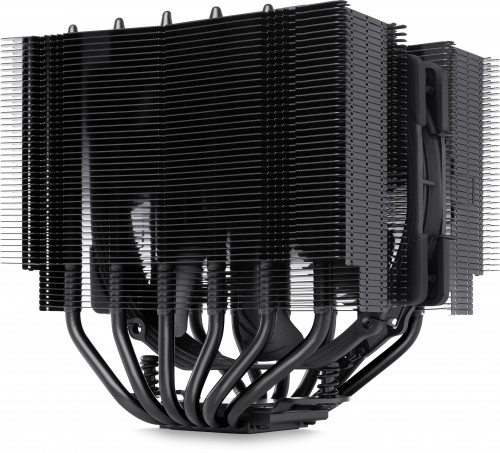 The NH-D15S chromax.black is an all-black version of Noctua’s award-winning NH-D15S premium-quality quiet CPU cooler. Thanks to the same asymmetrical dual-tower heatsink design and single NF-A15 PWM fan, it stays true to the NH-D15S’s successful formula of fusing dual-tower performance with excellent RAM, case and PCIe compatibility. At the same time, the chromax.black version with its black fan and black coated heatsink combines these assets with a sleek stealth look. Topped off with the renowned SecuFirm2 multi-socket mounting system, Noctua’s enthusiast-grade NT-H1 thermal compound and a full 6-year manufacturer’s warranty, the NH-D15S chromax.black is a premium choice for customers who seek a highly compatible dual-tower heatsink that looks just as great as it cools. 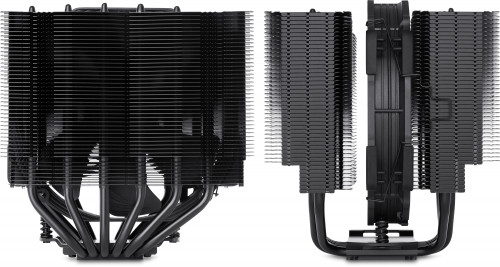 Side views of the NH-D15S chromax.black

Tens of thousands of enthusiast users all over the world swear by the NH-D15S’s quality and performance. Recommended by more than 150 international hardware websites and magazines, it is renowned for its unique blend of dual-tower performance and excellent compatibility.

The NH-D15S chromax.black is black from head to toe: featuring a black coated heatsink, black fans with black anti-vibration-pads, black fan clips and black mounting parts, it’s right at home in all-black builds and easy to integrate with other colour schemes.

Using the optional NA-HC3 and NA-HC4 heatsink covers as well as the NA-SAVP3 anti-vibration pads (available in black, blue, green, red, yellow, white), the NH-D15S chromax.black can be fully customised to fit popular build colour schemes such as black and red or black and white.

Compared to the award-winning NH-D15, the S-version uses an off-set, asymmetrical layout and a single instead of dual NF-A15 fans. This allows the NH-D15S to provide state-of-the-art heatsink performance while maintaining superior RAM and PCIe compatibility.

Thanks to its recessed lower fins, the NH-D15S provides 65mm clearance for RAM with tall heatspreaders or RGB illumination, making it compatible with most high-end modules on the market. As the lower fins are recessed on both sides of the heatsink, compatibility is excellent not only on LGA115x and AMD, but also on LGA20xx where there are RAM slots on both sides of the socket.

Complying with Noctua’s AAO standard and featuring sophisticated aerodynamic design measures such as Flow Acceleration Channels, the NF-A15 has quickly built up a reputation as one of the best 140mm fans on the market.

Using the supplied extra fan clips, the NH-D15S can be upgraded with either a second round-frame 140mm fan with 120mm mounting holes (such as the NF-A15 HS-PWM) for maximum performance or a common 120mm fan (such as the NF-F12 PWM) for improving performance while maintaining compatibility with RAM modules of up to 45mm height.

The NF-A15 premium fan supplied with the NH-D15S supports PWM for convenient automatic speed control through the motherboard. In addition, the maximum fan speed can be reduced from 1500 to 1200rpm using the supplied Low-Noise Adaptor for even quieter operation.

Extending below the fin-stacks, the large NF-A15 fan not only contributes to the superb CPU cooling capabilities of the NH-D15S but also provides massive airflow over surrounding motherboard components and heatsinks, thus ensuring excellent component cooling performance.

Compatibility with past and future sockets

Thanks to Noctua’s SecuFirm ecosystem, the NH-D15S can be made compatible with the older LGA1366 and LGA775 sockets using the optional NM-I3 mounting kit, which is provided free of charge. If technically possible, Noctua will also provide upgrade kits for future sockets, which makes the NH-D15S a safe long-term investment.

Noctua’s much-acclaimed NT-H1 is a pro-grade TIM solution that provides minimum thermal resistance, excellent ease of use and outstanding reliability. Chosen again and again by overclockers and enthusiast users worldwide, it has established itself as a benchmark for premium-quality thermal compounds.

Soldered interface between heatpipes and fins

With many heatsinks, the fins are press-fitted to the heatpipes. Due to the different thermal expansion coefficients of copper and aluminium, this fit can loosen over years of thermal cycling, which may lead to reduced performance. By contrast, the NH-D15S’s fins are soldered to the heatpipes in order to guarantee a superior thermal interface that doesn’t deteriorate even after many years of usage.

Noctua products are renowned for their impeccable quality and outstanding longevity. Like all Noctua fans, the supplied NF-A15 features an MTTF rating of more than 150,000 hours and the entire NH-D15S package comes with a full 6-year manufacturer’s warranty. 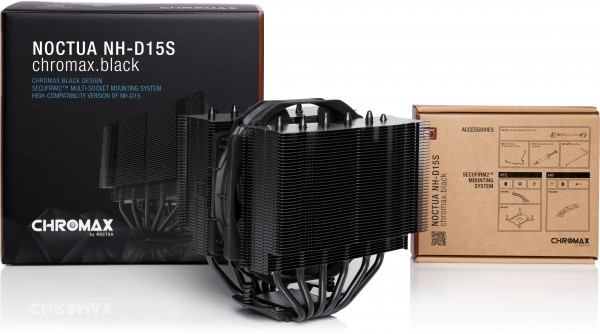