The AMD MiniQube is impressively diminutive but offers the advantage of being able to accommodate AMD’s 5000 series APUs, 64GB memory, up to two drives and large PCI Express cards, as well as being equally attractive!

The MiniQube offers an unbeatable blend of style and substance. It can accommodate full-size PCI Express cards and up to two drives. It uses a conventional fully-featured mini-ITX motherboard. And because we offer the latest power-frugal processors, it is cooled without any fans. The power supply is a fully integrated unit so there are no black “bricks” to have lying around behind the PC. We offer an affordable PSU as well a fully fanless power supply for customers wanting guaranteed silence. It has to be said that the fanned power supply is extremely quiet, as the fan rotates at only 500RPM making it virtually inaudible. It is only when the PSU is drawing 75% of it power does the fan exceed 1000PRM. This provides virtual silence for the vast majority of systems it would be used in.

The PC can be configured to your exact requirements with plenty of options in terms of processor performance, memory and storage. At present the PC can be configured with an AMD G-suffix processor. These APUs (Advanced Processor Unit) incorporate an updated graphics processor (compared to the 3000 series), as well as adding more cores and threads, which boosts overall performance and multi-tasking. There is also a selection of compatible AMD CPUs that require a graphics card to be installed, see below for more information. This PC can also be configured with up to a whopping 64GB of DDR4 RAM and there is a large range of storage drives available. 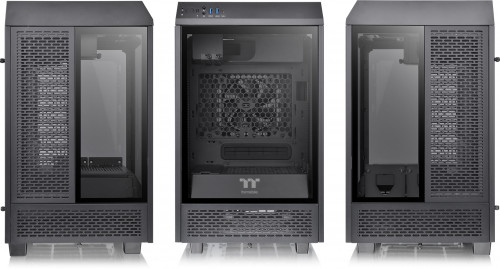 As mentioned above, some of the processors available with this system have integrated graphics, but there are some that don’t. This can be a little awkward when configuring the system, as to whether a discrete graphics card is needed or not. To try an make things clearer all processors that include built-in graphics have the following, “with Radeon Graphics” in their product name.

As mentioned above, this system can be configured with either Nofan’s 80-EH IcePipe or Noctua’s NH-P1 CPU cooler. It is important to note that the Nofan cooler is not compatible with processor over 65W TDP, they just output too much heat. Therefore if you would like to configure the system with a high TDP processor then the Noctua NH-P1 Passive CPU cooler must be selected. The table below shows which CPU cooler is recommended for different TDPs.

So if you need a lot of storage space (for videos or large quantities of digital photos for example), then we would recommend an HDD. On the other hand, if you prefer silence and speed (especially boot-up speed), then an SSD or M2 drive would be a better choice. Of course you can have more than one drive, so you could have the best of both worlds by choosing one of each! We recommend that customers chose an SSD or M2 drive as a boot drive that contains the operating system and important programs and a conventional HDD to store other data, but remember that if you intend to have a totally silent PC you might want to forgo the HDDs all together as they will make some noise due to their moving parts.

Here at Quiet PC we believe that customers have every right to expect the best possible performance from a brand new PC, so every system we build comes with our Clean Build™ promise. We install the operating system (if you order one), motherboard drivers, OS updates and Windows Security - that’s it. You won’t be pestered by pop-ups and nag screens and you can get on with using your new PC immediately without having to uninstall lots of junkware first. Your new machine will boot in super-quick time and will stay running quickly for many months and years to come.

Our hardware warranty runs for at least two years and is “collect and return” meaning that you don’t need to worry about getting the machine back to us - we will instruct our courier to collect it from you on a day of your choosing, then after we have checked and repaired it we will send it back to you by express courier at our expense. In addition, unlike many other PC suppliers, we have an “open-case” policy which means you are free to open the machine and perform your own minor modifications or upgrades without worrying that your warranty might be affected.