A top quality fully-built very quiet Mini ITX gaming PC, using an Intel 12th gen CPU and powered by a B660 motherboard. This small yet formidable machine consists of only the quietest components from brands we know and trust. 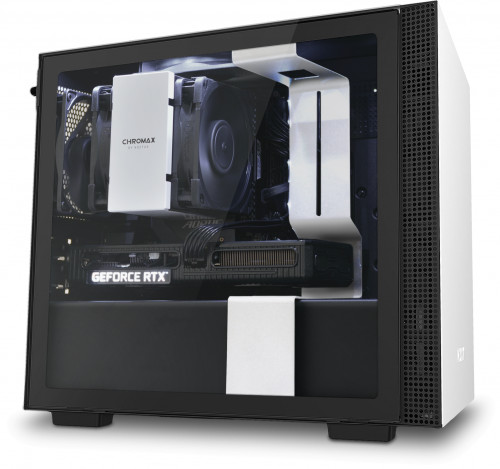 The Viper i17 ITX Gaming PC is the perfect choice for customers looking for a small, elegant and quiet PC while still being able to provide enough FPS for the most demanding of games. The PC is built around the NZXT H220i Mini ITX chassis, which offers excellent cooling at very low noise levels, as well as looking fantastic. The chassis features the intuitive NZXT CAM application to monitor and control your build, choosing from presets or custom controls for your RGB lighting and fan speeds to create the dream performance and looks for your PC.

The H210i chassis includes a RGB LED strip attached to the top of the chassis. The colour can be controlled using NZXT’s CAM software. The images above give examples of the builds in the three different case colours. The Black version has all LEDs switched off to give a more stealth look. The images also show the optional Noctua CPU cover for the NH-U12A cooler.

Any air-cooled PC will always be a compromise between quietness (arising from careful cooling design) and performance (which produces heat). This situation affects gamers even more than most because of course, the latest and greatest processors and 3D graphics cards tend to be the ones which run the hottest and which have the loudest fans on them.

We’ve done a lot of development work in this area to bring you a fully built high performance PC which we think offers the best of both worlds - virtually silent running (especially when the PC isn’t being used for gaming), and extraordinary gaming performance with great cooling design which gives total safety and reliability for your precious CPU and GPU.

The 12th Gen Intel processors offer a significant improvement over past generations, thanks to the introduction to Performance-cores (P-cores) and/or Efficient-cores (E-cores). The processors P-cores are optimised for single and lightly-threaded performance, while its E-cores, are optimised for scaling highly-threaded workloads. That means gamers, creators, and professionals can harness both intelligence and power to enhance the experiences that matter the most. All processors on the list feature P-cores, but not all offer E-cores. To give you an idea of much of an improvement the 12th gen is over the 11th Gen processors, take a look at the table below that shows some PassMark CPU Benchmarks, the higher the number the better the performance the processors offers.

The figures above are as of March 2022. They do change over time.

So if you need a lot of storage space (for videos or large quantities of digital photos for example), then we would recommend an HDD. On the other hand, if you prefer silence and speed (especially boot-up speed), then an SSD or M2 drive would be a better choice. Of course you can have more than one drive, so you could have the best of both worlds by choosing one of each! We recommend that customers chose an SSD or M2 drive as a boot drive that contains the operating system and important programs and a conventional HDD to store other data, but remember that if you intend to have a totally silent PC you might want to forgo the HDDs all together as they will make some noise due to their moving parts.

Here at Quiet PC we believe that customers have every right to expect the best possible performance from a brand new PC, so every system we build comes with our Clean Build™ promise. We install the operating system (if you order one), motherboard drivers, OS updates and Windows Security - that’s it. You won’t be pestered by pop-ups and nag screens and you can get on with using your new PC immediately without having to uninstall lots of junkware first. Your new machine will boot in super-quick time and will stay running quickly for many months and years to come.

Our hardware warranty runs for at least two years and is “collect and return” meaning that you don’t need to worry about getting the machine back to us - we will instruct our courier to collect it from you on a day of your choosing, then after we have checked and repaired it we will send it back to you by express courier at our expense. In addition, unlike many other PC suppliers, we have an “open-case” policy which means you are free to open the machine and perform your own minor modifications or upgrades without worrying that your warranty might be affected.

As a returning customer I am always certain of talking to people who know their stuff, don't oversell and despatch quickly. Perfect!
(Review via Trustpilot)